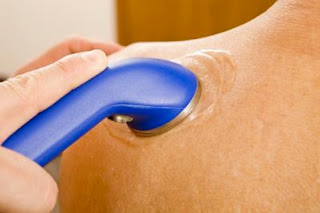 Ultrasound is a favourite tool of both clients and clinicians. Using a machine that sends high-frequency sound waves into the body's tissue, the idea is that it increases circulation and stimulates cell metabolism in order to speed up the healing process.

However, ultrasound has been under fire in recent years. By no means is anyone suggesting that ultrasound may be harmful (unless you misuse it), but the question is this: Is there actually any healing benefit happening?

There has actually been a lot of recent research done on ultrasound's effectiveness, making my own delve into this rather quick and painless.

On one hand, when using ultrasound on human tissue in vitro (that is, samples removed from the body and placed in test tubes), the results are promising. The vibration and mild heating effect of the ultrasound on those human cells definitely shows evidence of increased proliferation. So it makes sense that ultrasound works, right?

On the other hand, let's remember that a cell in a petri dish is different than a cell that's still in the human body.

Two of the best reviews of past studies that I could find concluded that there is insufficient evidence to back up the use of ultrasound as having any beneficial effect on the healing process when it comes to actual clinical use. While some studies may show that there is something occurring underneath that ultrasound head at the cellular level, the consensus seems to be that those minor changes are not significant enough to speed tissue regeneration.

In fact, looking back on even the older research, it seems that most studies that support the use of ultrasound were heavily flawed, such as being done only on rabbits or rats. 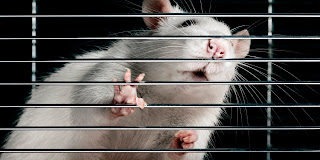 So, does ultrasound work? As far as I can tell, probably not. Can it be ruled out? I'm gonna say no, but it's going to take something groundbreaking, at this point, to save the reputation of this particular modality.

But hey, some clients love it. Maybe there's something going on that we haven't been able to detect yet, or maybe it's just that good ol' placebo effect. At least the therapist is getting a break from using his or her hands, though.

While you ponder that, I'll go ahead and give my clients a massage instead.
Posted by Jon at 19:56