We all remember the 2012 Olympics where Kinesio Tape (K-Tape or KT) first became widely-known to the public. Whatever the use for it, slapping patterns of brightly-coloured adhesive on insanely fit and tan world-class athletes sure brought the stuff to popularity. 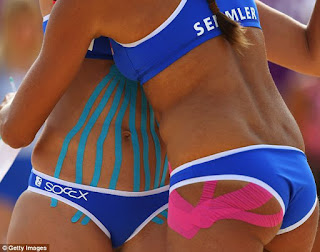 There are a lot of claims surrounding the use of KT. Some people swear by it, others have thrown it into the alternative category of pseudoscience, right next to aura-rearranging.

One thing that I immediately notice is that the KT website is purposefully vague about it's claims. Citing them, KT "helps"with a variety of injuries. It "provides support" as well as 24-hour relief. A lot of very nonspecific stuff. The most specific it gets is that KT provides proprioceptive feedback to help with relaxation or activation of muscles.

But let's find out what weight Kineseo tape (or whatever other knockoff brand of it) really holds... with science!

One of the biggest uses cited by KT lovers is that the application over certain muscles or tendons can facilitate an increased activation of that muscle. The mechanism supposedly works by providing neural awareness (proprioception) of the area that will trigger the nervous system to more-easily contract the targeted muscle.

Looking at the literature, it seems that, indeed, KT does have a proprioceptive effect on the muscles and can increase bioelectrical activity to the area. However, the significance of this is still in question. Other studies have found that while the tape improved sensory perception of force, actual muscular strength and power was unaffected. 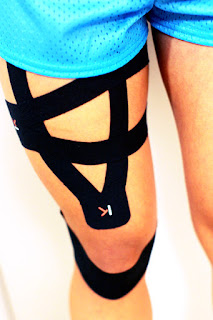 The verdict here might suggest that the KT can be useful as a tool for sensory feedback propagation, possibly allowing for the correction of motor habits. However, expecting the tape to actually increase the contractile strength of the muscle is likely to be a folly.

On the support side for KT, though, there was a use found for the application when it comes to range of motion. Specifically, it seems like if there is a limited range of motion due to muscular reasons (such as tension or weakness) there may be some proprioceptive mechanism that causes an increase range with the tape applied. I found studies experimenting with this concept on both the lower back as well as the knee following ACL repair. It must be noted, however, that the jury is still out on what this exact mechanism may be.

This one is another gray area. Can KT decrease pain caused from specific injuries? Yes and no.

I selected experiments using KT on subjects with patellofemoral pain who saw improved symptoms due to the aforementioned proprioceptive effects of the tape promoting more-balanced activation of the quads. Similar results are suggested in subjects with chronic low-back pain. Shoulder interventions have been mildly positive as well, but not significantly more effective than other modalities. Interestingly, one more study on shoulder pain found that subjects improved in one specific range of motion only from the tape but not overall function, suggesting that there may be limited application of biomechanical corrections with the application. If no direct motor pattern is present to offer immediate pain relief, such as with knee osteoarthritis, the KT proved useless. 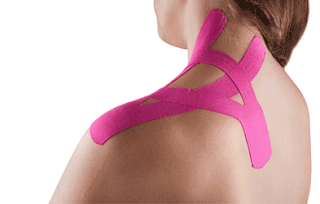 I think we'll be waiting a few more years on anything concrete in this realm.

This is one of the few effects that I really enjoy using KT for. 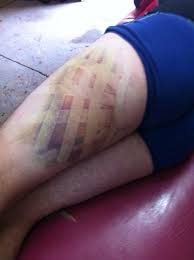 One fascinating use of KT is its ability to increase drainage of swelling, bruising, and edema. Looking at the research, it looks like there's a definite increase in the distance between the epidermal and dermal layers of the skin with KT applied which may allow for an increased lymphatic flow. Another study found the tape even more effective than some manual drainage techniques. However, there is also an definite limit in the effectiveness of KT when it comes to severe edema.

So can we put stock in Kinesio Tape? Well, it definitely may be useful for providing the neural feedback to cue the correction of certain muscular firing patterns and motor habits. Don't expect it to magically increase your strength or whisk away your pain, however. If you have a bruise, though, give it a shot!

Just don't wear it to play sports without covering it. Otherwise, you're advertising to every single opponent of what kind of injury you have.

It should be noted that virtually every one of the studies that I cited involved very small subject groups. Furthermore, KT is still in such an early stage of research that repeated validity is hard to confirm at this point.