The Secret In Simplicity

We’ve all witnessed the unfortunate reality of therapists who don’t look toward progressing an individual’s rehab program enough for it to be effective. You the know stories I’m talking about; the person who’s done clamshells for their hips or the one performing forward band flexions for the shoulders for the past eight months and for some reason still isn’t feeling better.

Has anyone not been given these?

On the flipside, I’m also privy to those practitioners who are overcomplicating what they prescribe to clients to the point that they’re either unable to perform their exercise effectively or just left totally confused and unclear as to what the goals of the plan are.

There are big hypes around new and fancy fitness and exercise methodologies, (such as DNS or Ido Portal’s training, for those of you in the know) and they are absolutely fantastic philosophies! I won’t argue against the scientific basis and benefits of any of these schools of thought and I’m eager to continue to study and learn from them more.

BUT, should a new client have all of that content thrown at them in the first few appointments?

I was listening to the Adam Meakins’ NAF Physio podcast and heard a great quote when they were discussing tendon health and exercise simplicity. “When treating an organism, let the organism organize.”

What this refers to is that the human body is an extremely sophisticated system. It works within itself incredibly well to perform its functions and adjust to its environment. Note that I never call the body a machine. It neither has a single manual on how to fix it, but neither does it need every single gear and function specifically programmed by us to work properly. Often, as soon as we make one or two adjustments to the faults that it’s experiencing, the body is intelligent enough to do the reprogramming and reorganizing on its own.

Going back to the quote, why it resonated is because it correctly suggests that the body has the potential to recover on its own accord with very simple changes or exercises. What’s more, simplicity translates to a better understanding for the client on how everything works, allowing them a better feeling of control for better treatment success. 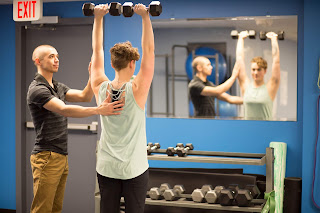 So, absolutely, I will begin by showing a person a simple chamshell or forward shoulder flexion exercise to get them started, and sometimes that has actually been enough to get them feeling better! In the event that those simple measures are unsuccessful, then that’s our cue to compound and layer on top of the plan with more complexity. But, by having those simple changes first, we’re building a foundation for both the conditioning and the knowledge in order to most-effectively progress the plan.

You don’t teach a person to multiply without first showing them how to add. Remember the K.I.S.S. principal: Keep it simple, stupid!