We're into November and the weather is continuing to change. Rain, cold, fog and, depending on where you live (probably not Victoria), snow! 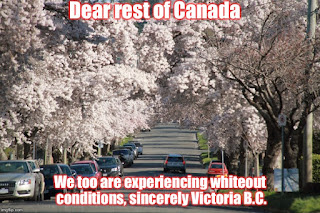 On that subject, there are those of you who might swear that you can predict the changes in weather based on the way your joints and muscles feel. "My elbow hurts; it's about to rain!" We've all heard those wives tales in the past. Is there any science that backs this phenomenon up, though?


Looking at what the research has ruled out first, there is very little support for any effects from weather on muscular pain. Low correlation between environmental changes and lower back pain has been found. Similarly, rheumatoid arthritis isn't shown to be reactive to climate conditions either.

On the other hand, there is some evidence that links temperature and pressure changes to migraines. The research needs to be expanded on to exactly narrow down the cause-and-effect, however. Let's also remember that very little is known about migraines in the first place, so we have very little knowledge of what multitude of factors could be at play here.

Osteoarthritis pain is one of the more-researched types of pain that is looked at in terms of weather. So far, there isn't a lot of evidence leaning toward one side or the other, but there are some studies suggesting that there may be a minor relationship between the climate and joint pain. Keep in mind that there are as many studies claiming the opposite as well, though.


One limit of the research, too, is that they have been unable to factor in psychological contributions to pain. The belief of weather-changing effects on pain is one that has been so heavily ingrained into several cultures. As a result, there's potential that any physiological changes could be triggered purely by the intensity of those beliefs.

Surprisingly, though, there isn't even a great link between weather and fibromyalgia, which we know has major psychological contributions. In that circumstance, we might have expected this condition to be one of the most-affected by weather, but it seems to not be the case.

So what can we conclude from all of this? Well, as far as the scientific research shows, there's only minimal, if any, support for the effects of weather on nearly any type of pain. This could be a frustrating read for many of you, as we certainly all have friends or family that are able to predict weather changes with eerie accuracy, though. One explanation could simply be that individual variance between people could show a link in a very minority of cases, but the fact is that this link does not seem to exist across the board.