We hear health and fitness professionals rave on about the importance of hip mobility all the time, but rarely hear much of an explanation for it. The ability for your hips to move through range of motion is crucial for the structural stability of the spine, though. I'll speak on the two most major movements at the hip - flexion and extension - and how dysfunctional range of motion here may negatively affect the back.

An inability to reach optimal flexion at the hips is the most-commonly pointed out issue on this subject. Flexion is the movement that occurs at the hip when you bring your knee to your chest. When lacking in range, it can heavily impact your ability to properly perform many exercises at the gym, resulting in the amount of notice it receives.

The most major example of poor hip flexion affect the spine is during the squat. Normally, when sinking into a squat, the spine should maintain it's neutral lower curve. However, if the hips are not able to complete the movement themselves, the spine will compensate and round out into flexion itself - the entire pelvis rolling forward - to reach the bottom of the squat. We commonly know this as "butt wink". 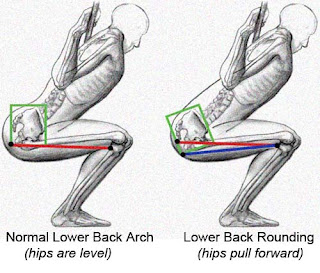 This is the most obvious example of this dysfunction, but the thing to realize is that if this large mechanical error occurs at the gym, it's probably occurring at a lesser - but much more frequent - degree as well during the rest of your day. That means you have excessive spinal flexion when bending down to pick up boxes, when seated in chairs, and possibly even walking and running.

(Let's side-step and remember that genetics may play a role here, and you may simply be anatomically unable to flex your hips as far as others. In these cases, you still want to work on maximizing the range you have, but may need to accept that your squat won't be as deep as some.)

The other major movement we see at the hips is extension - the leg pushing back and behind you. Just as with flexion, which a lack thereof can increase flexion of the spine, lack of extension at the hips can make the back compensate in the same way.

This habit isn't as often caught in your typical gym setting, as increased spinal extension isn't often perceived as looking dysfunctional like flexion. However, excessive compensatory extension of the back (most often seen with running athletes) can lead to lower back pain just the same; compression of the vertebral spaces and hyperactivity of the erectors of the spine being significant causes.

When it comes to hip flexion, the limiting factors of range tend to be soft tissue and bone. Restrictions of the ligaments as well as tension through the hamstrings are frequent barriers, as are the anatomical limitations that are discussed in the article that I linked to previously.

As for extension, there isn't so much a barrier to the movement, rather there being a lack of muscular stability for it. When the core isn't stable enough to hold the spine steady during the force created by extension of the hip, this is the case where you'll see the form break down and the spine move to follow. However, this is trainable.

As a final note, if you're thinking that you need to work on your hip mobility more now, let's remind ourselves to be gradual and that over-mobilizing can quickly lead to more injuries than it corrects for. Take it gradual, people!
Posted by Jon at 18:30