Here's a case study for you. This is Connie: 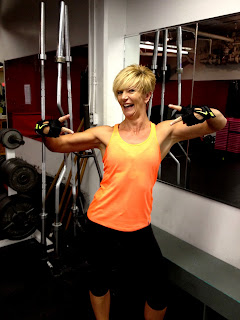 Photographed rather than filmed, because your computer volume does not go low enough.

The frustration was getting to her.
Connie is a dedicated gym-goer with a 6-day/week workout routine. She’s a personal trainer and yoga instructor, follows her own regiment religiously, never misses a day, and embodies the image that many women would kill for.
Connie’s struggle of late has been difficulty in getting better at wide-grip pull-ups. She added assisted pull-ups to her weekly back and bicep workout, trying to see improvement.
The result: FAIL! After four months, she was still stuck maxing out at four pull-ups, assisted! This raises a flag, as we can assume she has a thorough understanding of muscular training adaptation to be able to structure her workouts and see the desired result.
This tells us there’s a glaring discrepancy somewhere in her body mechanics preventing her from achieving her goal which needs to be addressed, much like I'll almost always see when treating clients for musculoskeletal injuries.
After hearing her complaints about the lack of progress being made, I took notice of her shoulder blades. If you saw them at the time, you would have seen her scapulae winging out during any shoulder retraction, cueing us to some kind of bio-mechanical error that needed to be addressed. No, these wings will not aid in flight.

With a working knowledge of anatomy and physiology, we know that the scapular muscles (most significantly the serratus anterior, but consisting of several other muscles of the shoulder girdle) are meant to stabilize the scapulothoracic joint. These muscles should be active in maintaining the position of the scapula against the rib cage during posture and to control its movement during ranges of motion at the shoulder.
When those muscles get weak, we see this winging, causing a change in the total angle of the shoulder girdle and improper recruitment of larger muscles which are now attempting to compensate for the lack of stability.
If that sounds complicated, just know that if scapular muscles get weak, big shoulder muscles get overworked, shoulder strength and health deteriorate.

I see this problem arise quite often in individuals who follow traditional weight-lifting programs, whether it’s team-sport athletes, body-builders, or average-Joe’s. What’s happening is that the nature of your traditional weight-lifting routine (isolated exercises, weight-machines, supported shoulders against benches) remove the use of the small, stabilizing muscles from the equation.
High end body-builders who receive proper training subvert part of this problem by properly adding isolation of those smaller muscles into their routines, effectively strengthening the scapular stabilizers and preventing the winging of the shoulder blade that would ruin the aesthetic appearance they need.
However, these individuals are still prone to chronic shoulder injuries such as rotator cuff tendinopathies and biceps tendon impingement. Why is that? It’s because the strength of those muscles may be well-trained, but the stability is still lacking. (Note: This is a tendency, not a rule. Don’t hate.)
We see errors quite often in the clinical setting when it comes to retraining muscular stability. In much the same way traditional weight lifters will train themselves, a therapist can easily get caught up in prescribing basic isolation exercises in either excessive amount or for too much time.
True, if there is severe weakness and inactivation of a particular muscle, then of course it needs to be targeted specifically at the start of a rehab plan. But as we progress an individual to the more advance stages of returning to function, synergistic muscular training is key.
We can’t expect proper shoulder mechanics (which requires stability provided from multiple smaller muscles working together) to arise from training each muscle separately and isolated through range of motion.

After realizing the large discrepancy in shoulder stability, I gave Connie two very simple exercises to do.
The first one was a scapular push. This one is hard to explain in written words, so take a look at the video below. This exercise was to be done daily for two sets of 10 reps per side.
The second exercise, the T-curl is an isolation one (as I mentioned is still often important as a supplement) for serratus anterior, one of the major stabilizers. This one was prescribed for 2-3 sets of 10 reps on Connie’s “pull” day at the gym.
Keeping the upper arm parallel to the floor and the entire limb in the frontal place, the cable is curled in with the palm flipping between every rep.
Connie did these two exercises, as instructed, for 8 weeks, without modification. After four months, pre-intervention, of Connie barely being able to muster out four assisted pull-ups, she is now pushing towards ten reps, unassisted.

The results speak for themselves.

Big lats and biceps are only part of the equation; you need to take care of the small stuff as well. It’s important to not neglect the prime movers, but when attempting to retrain healthy movement, the foundational support needs to be considered first when prescribing exercise.
Exercise rehab like this is clearly vital in the clinical setting. However in Connie’s case, her condition was not yet pathological and causing pain. In the case of clinical clients, we’ll need a bit more intervention on the therapist’s side.
With individuals who have such severe scapular weakness, you’ll also typically find significant spasm and adhesion in those same muscles due to the body attempting to create stability any way it can. It’s also important to look at the antagonistic muscles to what we’re focusing on; in this example that would mean taking some time to work through the pectoralis muscles that, combined with the weak upper back, will likely contribute to a rounder shoulder and t-spine posture. Connie is going to continue her training using these interventions, possibly with some further modification, and I can confidently predict that her progress will not plateau any time soon. Luckily, we were able to target her weaknesses before they became pathological issues, but this won’t always be the case. However, whether or not your treatments in the clinic start with basic exercises or even manual treatments alone to begin with, the progression that I did with Connie is an excellent example of late-stage rehab that we can use to get our clients above and beyond their pre-injury state.
Posted by Jon at 20:36